When Claudio Ranieri was told to pack his things from the King Power Stadium, the outrage from the media was something few had seen before.

Sacking the man who brought the Premier League trophy to the club, even if Leicester were in danger of getting relegated, didn’t fit the narrative, even if his second season in charge played out like that terrible sequel you wished producers had never made, ruining the experience from the first film.

Even when his assistant manager, Craig Shakespeare, took over as interim, people thought the move was heartless, with the 53-year-old labelled by Match of the Day pundit Martin Keown as ‘out of order’ for stepping in. 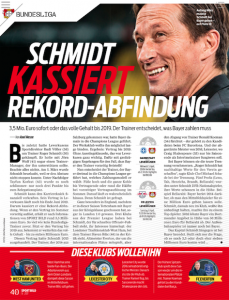 Thankfully for club, fans, and now manager, the bold move that broke everyone’s nostalgic hearts around the country has paid off.

Shakespeare has won five out of his five league games, as well as knocking Sevilla out of the Champions League, and Leicester appear to have found the successor to Claudio Ranieri, capable of getting the best out of their squad.

This is why when SportBild in Germany claim Leicester have been contemplating moving for former Bayer Leverkusen manager Roger Schmidt, we just didn’t buy it.

The magazine seem to think Leicester would want to change managers once the season ends, yet that seems unlikely.

While the German coach’s attacking football would suit the Foxes, as long as things keep going smoothly under Shakespeare, there is little chance of them altering anything.