Nadiem Amiri has one year left on his contract at Hoffenheim and has so far not responded to the renewal offer made by the club, claims Sport Bild on Wednesday.

The 22-year-old’s future looks to be away from the Bundesliga side and most likely to be at Bayer Leverkusen.

However, Leverkusen will face a challenge from Leicester City as the Foxes also ‘compete’ with them for the midfielder’s signature.

He has a release clause of €14m in his contract, which is only valid until the end of the month.

Sport Bild suggests Hoffenheim may let the player leave for the same price in August since he will have only a year left on his contract. 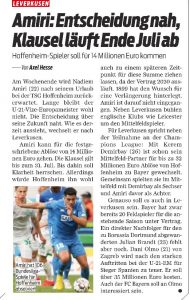 Regarding Brendan Rodgers’ side, the report doesn’t provide any additional details apart from the claim that Leicester are competing with Leverkusen for Amiri.

Amiri was part of the Germany squad that lost to Spain in the Euro U21 final, and during the tournament he scored three goals and registered two assists in five appearances.