Most of the Portuguese media covered the claims, with not much to add. A Bola, however, rules out the Foxes’ chances of signing either.

They say ‘Ricardo Pereira’s side’ are actually late in the race for both. That’s because Telles is on his way to Atletico Madrid, and Marega is heading to West Ham United.

The negotiations for Telles have been reported, and regarding Marega, only a couple of stories talked about his move to the Hammers. 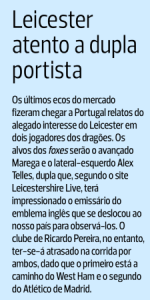 It’s also worth pointing out that A Bola is the only local outlet who are sure of Marega’s move.

Most of the Portuguese media believes he’s leaving Porto this summer, probably to the Premier League, but that’s all they know.

Since the season in Portugal ends today, we should soon have more news on both cases.