Over the past year or so a number of Premier League clubs have been repeatedly linked with a move for Atletico Madrid’s Thomas Partey. Watford, Southampton, West Ham and Middlesbrough are some of those said to be interested, but Leicester City weren’t really in the story.

Despite that, Spanish newspaper Mundo Deportivo say Leicester City made an approach for the player last summer, wanting him to be their replacement for N’Golo Kante. It’s claimed Thomas was one of the club’s ‘first options’ to take over from the now Chelsea midfielder, and Leicester contacted Atletico.

That approach was knocked back, and Claudio Ranieri moved on to other targets, with the position now being filled. 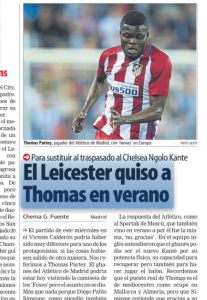 Thomas is 23 years of age and after a couple of loans is finding it a struggle to break through at Atletico. With only 277 minutes of La Liga football this season, it would be no surprise if the midfielder considers his future in summer.

Leicester interest is debatable, Mundo Deportivo have claimed the approach as part of their build up to the Atletico match. It seems strange they forgot to mention it earlier.