Once a flop at Newcastle United, Florian Thauvin could end up having a revenge story in the Premier League if Leicester City get their way.

That’s what L’Equipe are suggesting on Tuesday, as they reveal three clubs have made approaches for the France international, whose contract at Marseille expires next summer.

The winger has been in imperial form this season under André Villas-Boas, scoring three goals and assisting another five in eight league games, carrying on where he left off prior to his ankle injury that kept him out of action for pretty much all of last season.

Leicester are among those interested, joined by the likes of Milan and Napoli, and the prospect of such a prestigious free transfer is not one to be ignored.

That being said, Marseille haven’t said their last word in this, with talks existing between the French club and Thauvin’s representatives, but ‘only a long term offer could convince him to stay’. 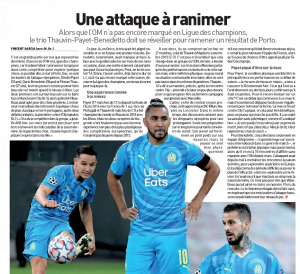 This suggests the deal currently on the table is more of a short-term thing, with money likely to be tight during the Covid-19 pandemic, which is where Leicester could come in and trump everyone.

While still affected, Premier League clubs remain in better financial terms than most clubs around Europe, and this could be an advantage for Brendan Rodgers’ club.

Either way, all that talk form England of Leicester’s interest in Thauvin appears to be well founded, and it’s definitely one to keep an eye on going forward.