With the transfer window slamming shut on Friday, and many clubs who had been expected to make signings still not having got all of them, it’s going to be a chaotic week.

As often happens towards the end of the window, lots of English eyes will look towards French football, where agents are often ready and waiting to present targets on a platter.

Monday’s edition of L’Equipe reports one of the men wanted in the final days of the market is Harold Moukoudi.

Leeds United, West Brom, Derby County and Stoke City are all interested from the Championship, with Burnley providing competition from the Premier League.

Moukoudi is a 22 year old central defender, who only moved to Saint Etienne in the summer, on a free transfer from Le Havre. 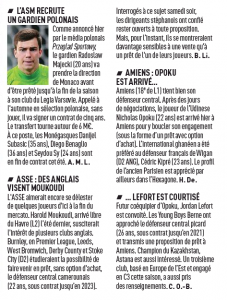 Since then, he’s been in and out of the team, with his situation getting worse recently.

All of Leeds, West Brom, Derby, Stoke and Burnley are said to be ‘studying the possibility’ of signing the player on loan without a purchase option.