Even though these interviews are normally generic, with officials talking little about their specific roles, they brought many interesting details about the Whites’ transfer window this time.

Orta explained the difficulties they have to make good signings, explaining there’s huge work being done before they settle on their targets.

“Those who say that signing with money is easy are mistaken; those who say it’s easy to sign without money are also mistaken,” Victor Orta told Record.

“All signings, with or without money, must be taken as a process. The player who yields isn’t the best, who didn’t yield isn’t the worst. Talent exists, but there are many ways to develop it, because it depends on many factors that are difficult to control. Therefore, medals shouldn’t be given for success or punishment for failure.”

The Portuguese outlet was interested in knowing more about a few specific names. One of them was Robin Koich, who was wanted by Benfica, but ended up choosing Leeds. Victor Orta talked about the video they showed the player to convince him to move to Elland Road.

“I made this presentation. We do it with all players because they decide with as much information as possible. Am I going to tell you it’s 25 degrees in Leeds? No, it rains and it’s cold. 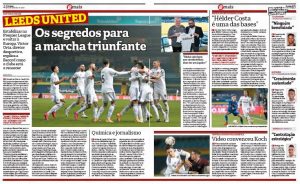 “Robin Koch saw a video of how he played, how Leeds played and how he could fit into the team. Football has changed and for the better, with a level of detail where everything is relevant. I always say that the decision must be made with the heart and the head. If one of the two isn’t aligned… it starts bad.

“It must be said that it took Robin three months to make a decision. He was free to listen to several teams, which is logical. Luckily, he chose us.”

On former Benfica striker Rodrigo Moreno, who was signed by Leeds in a €30m deal, Orta said: “It was a strategic signing to show ambition. Rodrigo had other options, but he was always interested in our project. I’ve followed him since the academy of Real Madrid, even before Benfica.”

Orta also talked about Raphinha, who moved from Sporting to the Elland Road side: “We’ve been following him since he arrived in Portugal. He went from the lower divisions of Brazil to Guimarães, arrived at Sporting and returned to succeeding, just like at Rennes. This sustained growth made us insist on the signing. He incorporates talent and a great physical level, making him a complete player.”

The official was asked about Benfica midfielder Florentino Luís as well. He was linked to Leeds United in the summer, but ended up being loaned out to Monaco.

“Yes, we liked him, but Benfica wanted to loan him out to get minutes. And in that position Kalvin Phillips plays, a reference and player of the Leeds academy. It was an operation from which no one would benefit.”

Orta also talked about the signing of Helder Costa from Wolverhampton Wanderers in 2019: “We convinced him to leave the Premier League, with such a video presentation and explaining how he could make a leap here.

“He’s a reference player and one of the foundations of the project. After a lot of work, humility and impressive human quality, I feel that he’s improving and I believe that he hasn’t yet reached the peak at Leeds.”