After spending last season on loan at Hellas Verona, Moise Kean came back to Juventus, where he’s contracted to until 2020.

However, this isn’t really helping his progress, as the arrival of Cristiano Ronaldo has added a rather large challenge to overcome for time in Max Allegri’s attack, meaning he’s only got 12 minutes of professional football to his name this season.

That’s why there’s been talk of a move away from Allianz Stadium recently, with Leeds United thrown into the mix.

We’ve covered the Leeds claims on Tuesday, with the first dating back to January, as Marcelo Bielsa’s side join Galatasaray and Marseille among the list of teams interested.

Now there’s even more reason to get excited as the youngster was, despite his limited club game time, picked by Roberto Mancini for his first international cap on Tuesday night in a friendly against the United States.

Italy walked away with a 1-0 win thanks to a Matteo Politano goal, and Moise Kean, the first ever capped Italian player to be born after 2000, impressed. 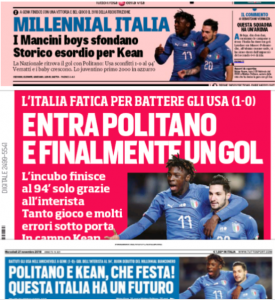 Praised by members of the Italian press, like Gazzetta dello Sport or Tuttosport, the 18-year-old, whose representative is a certain Mino Raiola, came off the bench for the final 27 minutes of the game.

While he didn’t play a part in the goal per se, his movement tricked the American defender into covering a non-existent run, leaving space for Politano to run into and score the winner in the 93rd minute.

The young forward is widely seen as the ‘future’ of the national team’s attack, with Tuttosport stating that today, and with Roberto Mancini clearly willing to give youth a chance, this could be the start of something very exciting for Italy as the old guard are progressively removed.

Leeds United’s transfer plan is good, but certainly ambitious. Kean needs minutes and a loan effort in January, as long as it charmed Juve and the player enough, doesn’t seem completely unrealistic.