You might have heard whispers in the rumour mill over the past week or so that Leeds United are interested in Erick Pulgar.

The Chilean midfielder, currently at Fiorentina, has apparently caught the eye of Marcelo Bielsa, who is turning his attention to Serie A in order to bolster his squad midseason.

Signed from Bologna for around £9m back in August of 2019, the defensive midfielder has never managed to make himself entirely indispensable in Florence, with the various managers struggling to start him regularly.

It’s been no different with Cesare Prandelli, and Corriere dello Sport explain that alongside Alfred Duncan and Pol Lirola, Pulgar has a run of games coming up where he has a chance to prove himself.

Fiorentina have five matches in 14 days between the third and 17th of January, which will be ‘the decisive test to decide the future’ of the trio. 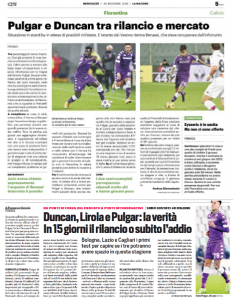 A busy schedule means squad rotation, which leads to more opportunities for players who don’t normally start, but it appears that if Pulgar can’t convince Prandelli that he can be useful, he’ll be allowed to leave.

That’s good news, to some extent, for Leeds, as La Nazione continue to push the interest from Elland Road, reiterating on Wednesday that Bielsa has ‘set his eyes’ on the midfielder and the Fiorentina manager’s decision to revamp the midfielder ‘could suggest the club to value the Chilean’s sale’.

Certainly something to keep an eye on over the next couple of weeks.