Fenerbahce paid €2.5m to Zurich last summer to sign Frey but the 24 year old failed to make an impact with the Turkish side, scoring just 5 goals in 25 appearances.

Subsequently, Fenerbahce are looking to sell the player despite the recent departures of senior forwards Roberto Soldado and Islam Slimani.

According to Fotomac, along with Leeds United, Caykur Rizespor are also interested in signing the player and his future will be much clearer in the coming weeks.

It’s claimed the Swiss striker’s ‘first choice’ would be to play in England, hence the Leeds United option being pushed. However, Fotomac say Fenerbahce could send him to Caykur Rizespor as part of the Vedat Muriqi deal. 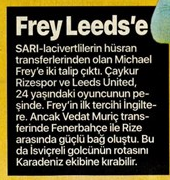 Frey has also been linked with Genk and Middlesbrough in recent weeks, and is under contract with Fenerbahce until June 2022.