Leeds United forward Chris Wood has spoken about the struggles he had against Newcastle United and Brighton earlier in the season. The New Zealander is current Championship top scorer after an impressive season for Leeds United.

Speaking to Sky Sports EFL podcast, Wood said he had a difficult time when he came up against Newcastle United’s central defenders. The forward believes the pairing were tough, but he also had his problems with Brighton. Wood said playing Brighton away is a hard fixture as they are so competitive.

“The Newcastle centre-halves were quite tough. They were decent. Brighton’s pair down in their backyard were very difficult too. They put up a good fight,” said the Leeds United star.

Wood came up against Jamal Lascelles and Ciaran Clark for Newcastle United, and the pair obviously left an impression.

Both Newcastle United and Brighton occupy the two automatic promotion places, but Leeds United still have an outside chance of catching them. Garry Monk’s side sit comfortably in the play-off places, and are eight points off Brighton.

This weekend will be crucial in Leeds United’s season as they travel down to promotion rivals Reading. Monk will be hoping he has Wood at his disposal after his missed New Zealand’s last match due to injury. However, it later transpired Wood left New Zealand on Monday and his absence was more for the benefit of Leeds United.

“We do not exclude anything” – Watford deal for player could still be extended, ‘dialogue’ to take place 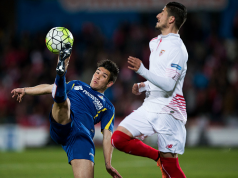