Leeds United defender Pontus Jansson has been labelled a ‘big game hero’ by the Swedish media. The Sweden international was on hand to score Leeds United’s winner during last night’s victory over Blackburn Rovers.

Jansson has been receiving praise in the Swedish press ever since he arrived at Leeds United in the summer transfer window. They have been several reports saying the 25-year-old has become a ‘cult hero’ with the Elland Road faithful during his time in England.

AftonBladet say Jansson has become fully appreciated by the Leeds United fans, which has led to two chants being thought up for the Swede. The Swedish newspaper says this is in total contrast to being frozen out by Torino, to then become a crowd favourite at Leeds United. 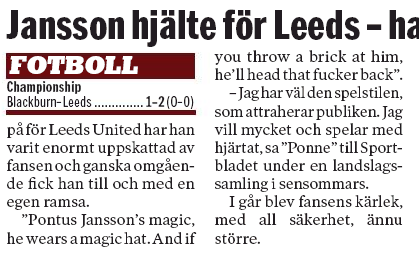 In the typical Scandinavian way, Aftonbladet print Jansson’s Leeds chant in full, and there’s a clear pride in Sweden at how the defender is seen as a warrior. Every team wants their own Pontus Jansson.

Jansson is expected to become a permanent fixture at Leeds United, with recent claims he will commit himself to the club in the summer. The Leeds United star is expected to sign a four and half year deal with the club for a fee in the region of £3.4m.