Monday saw the most interesting claims on Nahitan Nandez to Leeds United yet.

Earlier reports had stated the Premier League side were prepared to pay the midfielder’s full €36m release clause, which didn’t make a lot of sense. Cagliari may be aiming for that amount, yet Andrea Radrizzani going straight in that level just wasn’t believable.

La Nuova Sardegna managed to bring a new slant, which made a move sound likelier. It was stated Leeds United had offered to pay €15m to take the Uruguayan on loan for next season, with a purchase obligation of €15m at the end of the campaign.

With a true obligation clause the deal is simply a €30m transfer, with completion deferred until the end of next season.

That wasn’t good enough for Cagliari chief Tommaso Giulini, who had already made clear, presumably to Radrizzani, that he wants the €36m but will accept two payments, so €18m this summer and another €18m next year. 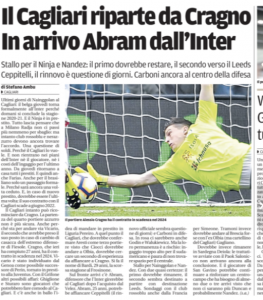 They just seem a little taken aback that after the progress, and their subsequent big claims, nothing really happened on Monday to push the deal forwards.

La Nuova Sardegna may not have noticed, but there’s a good chance the radio silence is related to Leeds working to close a deal for Junior Firpo yesterday, so perhaps when that’s done it will be Nandez’s time to shine.