Sampdoria have taken a shine to Fredrik André Bjørkan, however, they may have to face competition from Leeds United and others to sign the player.

In their Monday edition, La Repubblica report the Genoa club are looking for a back-up left-back, and that’s where Bjørkan comes into the picture.

The 22-year-old currently plays for FK Bodø/Glimt in the Eliteserien, which is the top division in Norwegian football. He’s a Norway U21 international, but is yet to be called up for the country’s senior squad.

La Repubblica push forward Leeds United, Newcastle United and Norwich as other clubs who are interested in the player, yet that seems like a long shot at this moment in time. 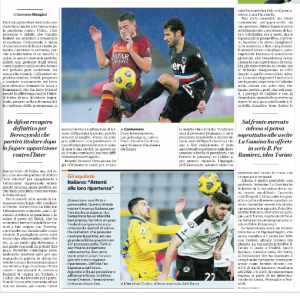 Interest from Premier League clubs has been mentioned previously, and it feels a little ahead of the fullback at this stage of his career.

Should he move to Leeds, for example, then there’s a realistic chance he would end up with the U23 side rather than Marcelo Bielsa’s first team squad.

That wouldn’t be great for his development, and arguably the same can be said about being a substitute at Sampdoria.