One of the great stories of Leeds United’s promotion, other than the fact the club returned to the Premier League after 16 years of wait, is the emergence of Illan Meslier.

The young Frenchman stepped in for Kiko Casilla when the Spaniard was banned and impressed so much that he stayed as Marcelo Bielsa’s number one choice for the start of the current campaign.

It hasn’t quite gone to plan, seeing as he’s conceded 17 goals in his first eight games, but that has a lot to do with the way Leeds are playing rather than being specifically down to him.

Either way, the Yorkshire side signed him for £4m from Lorient after his initial loan and subsequent promotion, but that doesn’t mean he will stay at Elland Road forever.

This is what Gazzetta dello Sport are suggesting on Wednesday when looking at the future of many young players around Europe, including the goalkeeper. 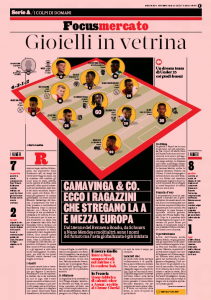 They explain his rise at Leeds has been ‘exemplary’, and his value is ‘soaring’, adding his talent ‘hasn’t escaped our talent scouts’, referring to those of Serie A sides, always keeping an eye out for the next big thing.

There will be other teams in other big leagues also casting their eye on Meslier, as Gazzetta add it’s ‘not just’ Italian talent spotters who have taken notice.

Leeds better be prepared, because their goalkeeper could be hot property come the end of the season, regardless of how he fares for the rest of the campaign, as it seems he’s already shown enough.