Linking Fernando Llorente with a move to Leeds United was a pretty obvious one for the English media to go for.

The striker’s Tottenham contract expires at the end of the season and a renewal seems unlikely. Llorente wants to be somewhere he’ll enjoy more minutes on the pitch and is aware that’s unlikely with Harry Kane in front of him.

A return to Spain has seemed the likeliest options, and the player himself has spoken repeatedly about going back to Athletic Club Bilbao.

That seemed difficult at one stage, with the Basque side’s president putting doubt on it by explaining Llorente left under difficult circumstances… suggestion there’s still some bitterness about his free agent move to Juventus.

But that president, Josu Urrutia, is in the process of leaving, giving the Spurs man a better chance of returning home.

AS report on Friday that Leeds United would be up against Athletic for two signings, Llorente and Ibai Gomez. 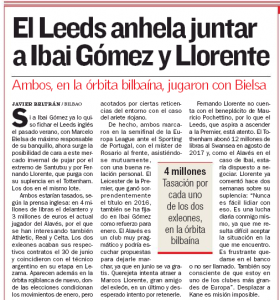 Gomez is also a former player for the club, and AS explain that during Athletic’s great Marcelo Bielsa inspired Europa League run, the pair not only both scored against Sporting in the semi-final, they also assisted each other.

The Spanish newspaper explains that not only do they work well on the pitch together, they have a ‘close personal relationship’.