Jerry Mbakogu’s potential move to Leeds United is moving very quickly indeed in the Italian media, and there’s some disagreement over the potential deal.

Sunday’s edition of Gazzetta dello Sport covered the trip of two Leeds officials to watch Mbakogu for Carpi against Spezia in Serie B.

The Italian newspaper said Leeds United had picked just the right day to scout the player as he put in a great performance and was the ‘driver of success’ for Carpi.

Then a claim from Di Marizo’s website stated Leeds United have a rough agreement to sign the player for €4m. It was suggested a work permit could be a problem, but that contradicts claims elsewhere that Mbakogu has an Italian passport, having moved from Lagos as a youngster.

Gazzetta dello Sport have their own take on Monday, saying Leeds United having a meeting in Milan today to finalise the signing of Mbakogu for €7m, a relatively much higher figure. 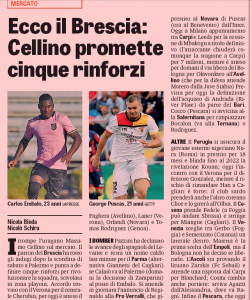 It’s also explained the striker will stay at Carpi for the rest of the season, only moving to Leeds United in the summer.

That would suggest he’s being seen as a replacement for Pierre-Michel Lasogga, currently on loan from Hamburg.

The same Italian report, a round-up on Serie B business, headlines with a claim that former Leeds United owner Massimo Cellino is looking to sign five players for Brescia before the window closes.