Indeed, the Championship club have probably been on the end of more transfer rumours than scouting reports from the country, Tobias Figueiredo saw to that.

Just over a year ago, on Friday September 29th, Leeds United had an official watch the match between Tondela and Chaves. It wasn’t an obvious game to watch and it’s clear there was some vague transfer plan in the works, but then Leeds didn’t follow it up.

The club didn’t appear on future scouting lists for either club they watched, and that pretty much seemed that. 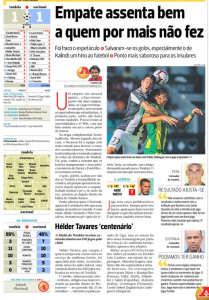 On Friday, October 5th, Leeds United had an official watch the match between Tondela and Nacional, reports A Bola.

It was a poor 1-1 draw and nobody from either side stood out, so whatever Tondela transfer question Leeds wanted answering probably still remains.