The trips aren’t restricted to the Premier League, and Championship clubs can often be seen on the lists, however, Leeds United certainly aren’t a regular among them.

As the club has recently upped their scouting around the world, that hasn’t yet really had an impact in Portugal, with Leeds United not attending first division matches regularly.

That may be about to change. 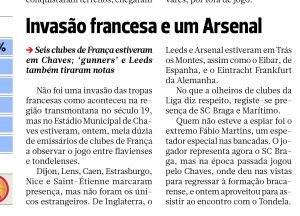 match between Chaves and Tondela. The 1-1 draw wasn’t the biggest of matches in Portugal, but Leeds United weren’t alone in attending.

A Bola reports there was a ‘French invasion’ of clubs there, all trying to spot a transfer bargain. Leeds United were also joined by Arsenal, Eibar and Frankfurt.

The Portuguese press aren’t yet sharing any educated guesses on who Leeds are interested in, although that could change if they return to watch either Chaves or Tondela soon.