Tuttosport sound a little frustrated today with their take on the transfer situation at local club Torino.

The Serie A side have been trying to sign Ian Poveda, whose contract with Manchester City expires in the summer. Poveda and his family visited the city and the club’s facilities, and an offer on wages was made.

That stood at around €400k per year, which is a figure likely to be after tax, but Tuttosport now say Leeds United have offered ‘much more’.

It’s believed Marcelo Bielsa’s side have overtaken Torino and are closer to getting a deal done. Whilst the suggestion is it’s all about wages, it may also have something to do with Manchester City.

A few days ago it was reported in Italy that City want to keep some control over the player’s future, perhaps in the form of a buyback clause. They had therefore contacted 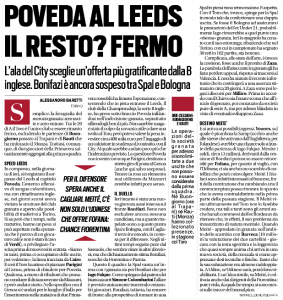 ‘friendly’ clubs, with Leeds United and Celtic named, to place him there.

TMW believe Poveda ‘seems to be close’ to an agreement with Leeds, and, just like Tuttosport, they present this as bad news for Torino.