Home Championship With Leeds United offer in, club president says he’ll “do everything” to...
SHARE

It may be as a result of their trip for a friendly on Sunday, but Monday saw Leeds United linked with a couple of players in Italy.

The strongest and biggest claim was around Andrea Petagna, with TMW reporting the Championship club have submitted a €15m offer for the SPAL player.

That wasn’t enough, according to the same report, with the Serie A side looking for a fee in the region of €25m. Even if they come down from such a figure, they’d surely have to do so quite dramatically for the player to be in Leeds’ reach.

Petagna is 24 years of age and scored 17 goals in 37 matches for the Serie A club, so he’s not only an important option for now but also an investment for the future.

Tuesday’s edition of Gazzetta dello Sport backs up interest from Leeds, saying there’s no shortage of interest and that the Whites are the latest to come forward. However, echoing TMW, they make clear ‘the figures aren’t enough’. 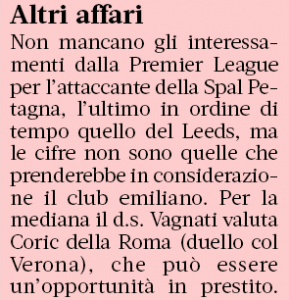 Meanwhile, the club’s president Walter Mattioli has been speaking to the Italian media, with Calciomercato quoting him as saying: “Petagna and Fares (Mohamed Fares, wing-back)? It is our goal to keep them in Ferrara to make a competitive team.

“The championship is coming and the market is still long, but we will do everything to keep them.”