Italian newspaper Tuttosport today features a big story on Spezia striker M’Bala Nzola. Signed in the summer, he’s having an impressive start at the club with nine goals so far.

The article’s biggest focus is on the player’s early days, and that’s why they’ve managed an interview with Kebba Cissè, the man who discovered his talents at a young age.

However, despite having just arrived at Spezia, there’s already a list of clubs who are ‘monitoring’ Nzola and considering a transfer swoop, and Leeds United are named as one of them.

The story doesn’t bring any further information on talks or offers from the Whites for the player, so it sounds like Marcelo Bielsa’s side are holding fire for now. 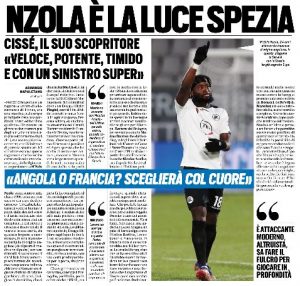 There are also other clubs from England, Germany and Italy who’ve been following Nzola’s progress, so perhaps there’ll soon be an auction for him, and Leeds should be aware of that.

Since he’s just arrived at Spezia and his contract runs until 2023, the Serie A side won’t be in a rush for his sale.