As you might imagine, Leeds United’s return to the Premier League after a 16-year absence is headline news around the world today.

Leeds are back in the big time, where many believe they belong, and there is one man who has masterminded it; Marcelo Bielsa.

The Argentine, a man who splits opinion firmly down the middle but is adored at Elland Road, has rebuilt his reputation at Leeds and returned them to the big time once more.

That’s covered in Italy today, with Gazzetta Dello Sport covering the situation and the relationship between Bielsa and Leeds chief Andrea Radrizzani.

In a piece under the headline ‘El Loco and the Italian’, they explain how the ‘Argentine myth’ on the bench and the Italian entrepreneur have mastermind Leeds return to the big time.

They say the club’s ‘long dark night’, which has involved relegation, sixteen ‘tormented’ years outside the top flight, economic crisis and a stint in League One, among numerous other things, is now over courtesy of the duo.

The newspaper takes a look through the history, explaining that ‘madness is part of the DNA’ at Leeds and that’s part of the reason Bielsa, whose appointment has been ‘a stroke of genius’, fits in perfectly. 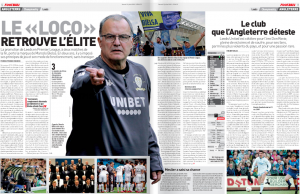 A ‘strong man’ with a personality to match, Bielsa needed  to ‘control the anxieties’ at Leeds and a city that is ‘accustomed to thinking big’ which was ‘unable to resign itself to mediocrity in football.’

Radrizzani, it explains, gave ‘full powers’ to Bielsa and, with promotion now secured has ‘won the bet’ in that regard.

And that’s courtesy of Bielsa, who, despite difficulties with the language has ‘ruled according to his style’ and ‘entered the hearts’ of everyone in the city; where he’s the ‘absolute star’.