Leeds United manager Marcelo Bielsa is a man of principle.

When he believes he’s done something wrong he’ll face up to it and deal with the consequences.

But if he believes he’s been wronged, then there’ll be no leniency when it comes to dealing with those who have gone against him and his team of staff.

Bielsa doesn’t like people going back on their word, and that’s why he walked out of Lazio so quickly, realising that promises made were there to be broken.

At Lille, the Argentine manager didn’t feel he had enough backing to implement the changes he wanted at the club. In December 2017, the French club terminated Bielsa’s contract and since then there’s been a legal dispute.

Wednesday’s edition of L’Equipe reports the Leeds United manager is seeking €19m from Lille. That’s made up of the rest of the contract he had left and further payments for damages. 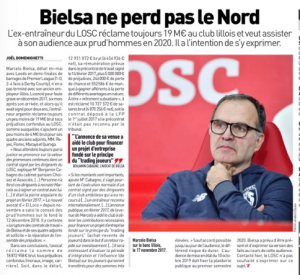 The fun part is that Bielsa plans to show up in court himself next year, with the Leeds United manager wanting to give his side of the story personally.

Benjamin Cabagno, who is representing the manager, is quoted as saying: “The public announcement in February 2017 of Marcelo’s arrival helped the club to obtain the necessary contributions to finance a business project based on the principle of “player trading” in the goal of a quick return on investment. It will be interesting to evaluate the period of integration and influence (of Bielsa) on the players who will be transferred for very high sums.”

The argument seems to be that the manager fulfilled his duties and Lille’s sales this summer will evidence that.