Erick Pulgar was linked with a move to Leeds United as far back as September, and at that time the transfer was being rumoured for the extended summer window.

West Ham had been linked around that time, and it was reported Marcelo Bielsa’s side had entered the picture with an offer worth around £10m. That wasn’t considered enough by Fiorentina, with La Nazione stating it was ‘not considered sufficient, but the scenario can take a different turn at any moment’.

La Nazione and others in the Italian media have continued the claims since then, and it’s obviously all been given some encouragement with the opening of the January transfer window.

There’s again been talk of approaches, but the situation has felt like Leeds keeping the midfielder there as an option, before making a final decision on whether to go through with a serious transfer attempt.

Fiorentina have been presented as willing to listen to approaches for their players, as they look to add funds so they can make their own purchases during the winter market. 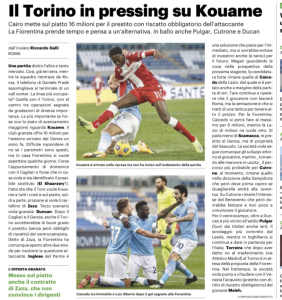 Thursday’s edition of La Nazione reports Leeds United have made the ‘most concrete’ contact for Pulgar, and the player is ‘closer to a farewell’. The 26-year-old hasn’t got off the bench for Fiorentina in the last two matches, which is seen as something of a sign.