Leeds United are one of a number of clubs looking to sign Giovanni Troupée from FC Utrecht.

All the clubs are keen on a loan until the end of the current season, with no explanation whether the initial move could include a clause to sign Troupée outright until the summer.

Troupée is a 19 year old Dutch right back, and he has a contract with FC Utrecht until June 2021. He hasn’t been playing much for the Eredivisie club so far this season, so a loan move may not be the worst idea for him. 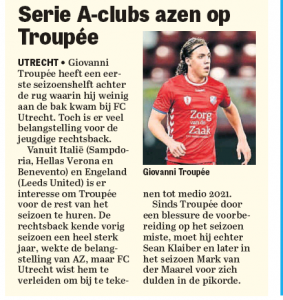 The player then missed preseason due to injury and has found himself sidelined as Sean Klaiber and Mark van der Maarel play instead.

Leeds United interest is likely prompted by Luke Ayling’s season ending injury, and Thomas Christiansen may be keen to add another right back to his squad.