It was said these unnamed sides got in touch to know the conditions to potentially sign the coach, and heard he’s only focused on taking the Lions to the league title for now.

Even though O Jogo didn’t reveal who were the clubs, a similar story from journalist Bruno Andrade makes it sound like Leeds United and Leicester City could be them.

On Twitter, the reporter doesn’t relate his information to O Jogo’s. He just claims that Whites and Foxes are following Amorim’s situation ‘with attention’.

It’s claimed that in Leeds United’s case, it has to do with the uncertainty regarding Marcelo Bielsa’s contract renewal with the club. 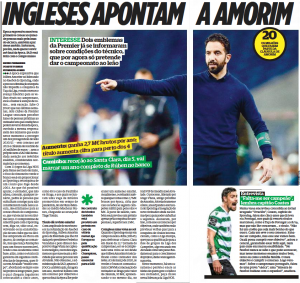 Meanwhile, Brendan Rodgers has his value going up, meaning he could leave for a new club, so Leicester City are watching out for a backup plan.

Bruno Andrade doesn’t bring any details on how far these clubs have got or if Ruben Amorim has given a positive sign to any of them.

Now with Sporting close on winning the Portuguese League title after many years, it makes sense that the manager is completely focused on his job for now.