In October we covered claims from Portugal that Marcelo Bielsa had sent spies to the match between Tondela and Nacional. The Championship club had just started sending officials to Portuguese matches again, something they don’t do as often as some other clubs in the division.

Visits to Sporting and Benfica followed, leading to several transfer rumours which then went quiet.

This weekend, as reported by Record, Leeds had an official at the match between Chaves and Vitoria de Guimaraes. They’ve watched Chaves before, but just over a year ago.

The two teams mentioned aren’t among the most scouted and it would be thought there’s an idea in mind before sending an official to the game.

There’s been more Portuguese scouting from Leeds than usual over the past month or so, and the pattern is certainly emerging of the club looking towards that route for recruitment. 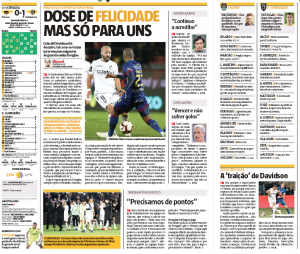 have also enjoyed success. Victor Orta and his transfer team are laying the transfer groundwork ahead of January and beyond.

Guimaraes won the match 1-0 and the best player on the pitch, according to Record, was goalkeeper Douglas Renato de Jesus.

The 35 year old Brazilian kept a clean sheet, and his contract ends in June.