Leeds United have ‘positioned’ themselves to complete the signing of Toulouse midfielder Kouadio Koné having already held talks with his entourage.

That’s according to RMC Sport journalist Mohamed Bouhafsi, who say Marcelo Bielsa’s side are keen on the 19-year-old midfielder.

He adds that Bielsa ‘must now position himself’ on the player, reporting that the newly-promoted side are not the only ones interested.

AC Milan also have him on their list while ‘several English clubs’ are also thought to be keeping an eye on him.

That is all that Bouhafsi can offer, failing to state whether talks have been opened with Toulouse about a move, how much the youngster would cost or anything of that nature.

Given they’ve already held talks with the player’s entourage, though, that would suggest Leeds are keen to bring him to Elland Road and the process of making that happen is underway. 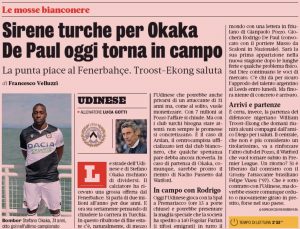 The news is undoubtedly presented from a positive stance from the RMC journalist, which cannot be said of Leeds pursuit of Udinese’s Rodrigo de Paul.

Gazzetta Dello Sport cover that potential move today and say that, despite reports in England that the Argentine could arrive as soon as Monday, nothing ‘concrete’ has arrived at the Serie A side at present.

That would suggest a move is nowhere near close to happening and reports of Leeds’ strong interest may be a little wide of the mark at this point.