Takvim claim Leeds United are the latest club who are showing an interest in Galatasaray striker Mbaye Diagne.

The Senegalese international has been linked with moves to Watford and Nottingham Forest in recent weeks, with Sabri Lamouchi said to be pushing the interest from Forest’s perspective.

The Turkish newspaper reports Leeds United will be looking to strengthen their squad if they get promoted to the Premier League. It’s stated that they are looking at options to add to their attacking line and Diagne is a target.

However, despite their interest, Takvim claim Galatasaray have yet to receive an offer from the Championship club, and that Leeds United are currently waiting to see the impact the coronavirus will have on their finances.

Leeds United were linked with a move for the Diagne during the 2018 summer window, when he was playing for Kasimpasa. 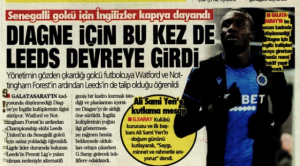 Diagne eventually joined Galatasaray for €13m six months later, and at the start of the season he was loaned out to Belgian champions Club Brugge.