Leeds United’s search for a winger in the summer ended when they signed Daniel James from Manchester United.

Prior to James’ arrival, reports stated the Whites had long maintained a concrete interest in Club Brugge’s Noa Lang. The pair are flexible, which means having the two in the same squad wouldn’t be out of the question.

The winger’s agent confirmed on Wednesday there were several suitors for his client, without revealing details of those clubs.

Later that day, Club Brugge manager Philippe Clement backed the Leeds target to make a switch to a ‘big club’ next summer.

The 22-year-old and Charles De Ketelaere led the Belgian side’s attack in their 1-1 draw against Paris Saint-Germain. Hans Vanaken scored the equaliser for Club Brugge in the 23rd minute after Ander Herrera put PSG in front.

Lang impressed for his side and even came close to scoring the winner in the 74th minute.

Het Nieuwsblad gave him a 8/10 rating and stated the attacker was ‘clearly eager to show himself on the biggest stage’. 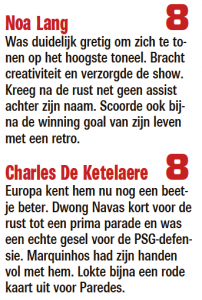 Over at Het Laatste Nieuws, only two players got 9/10 rating, Lang and De Ketelaere.

Regarding the former Ajax man, HLN say clubs who didn’t know much about Lang, will now be very aware following the PSG match.

Having managed 17 goals and 11 assists last season, Lang has four goals and four assists in nine matches this season. His stats and latest display in the Champions League justifies Marcelo Bielsa and Victor Orta’s decision to identify the player.

Unfortunately for Leeds United, performances like this will make it harder to sign him in the future.