Leeds United are back be being linked to Freiburg defender Robin Koch today.

In a story from Portuguese newspaper A Bola, it’s said the player isn’t renewing his deal with the German side, and that’s expiring in 2021.

It means Freiburg will see themselves forced to sell him in the next transfer window, and are now demanding €10m for the 23-year-old.

Speaking of the clubs who’ve been interested in the player, A Bola writes that Benfica and Napoli are in the race, while Leeds United have him as a target as well. 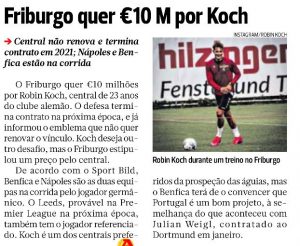 The most interesting thing is that the information is credited to German outlet Sport Bild. When checking the original story, we could confirm that Benfica and Napoli have both been named, but that didn’t go for the Championship side.

Leeds had previously been linked to Koch by the Portuguese media, so perhaps A Bola are just repeating what they’ve said in the past.

Either way, A Bola refers to the Elland Road side as a club who’re likely to be in the Premier League next season, which means they take the Whites’ competition for Koch very seriously.