The winger, whose priority is to join the La Liga side, is attentive to Ousmane Dembélé’s situation at the Camp Nou, according to Mundo Deportivo.

Dembélé’s deal expires on June 30th and he’s so far not agreed an extension.

If Xavi Hernández’s side are facing financial issues to tie down Dembélé, then it looks like they will have difficulty to take the Brazil international away from Leeds United, who, according to Mundo Deportivo, are asking for €65m to part ways with the former Rennes man.

Jesse Marsch’s side are working to sell Kalvin Phillips to Manchester City. The midfielder’s impending sale can help them deal with Raphinha’s case with peace of mind.

In addition to this, Leeds are aware the Spanish giants have other priorities,  such as Robert Lewandowski, before signing Raphinha.

Therefore, Leeds are ‘choosing to listen’ to Arsenal. Mundo points out the deals between the Premier League sides are ‘always more generous’ due to their good financial health. 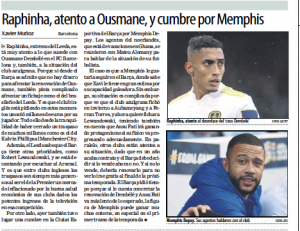 Raphinha is attentive to Dembélé’s situation and whether Barcelona can make an offer to Leeds for his signature.

If Barcelona don’t make an offer, the South American has a decision to make on whether to wait for the Camp Nou side or join Arsenal, especially with Leeds choosing to listen to Mikel Arteta’s side.