The 24-year-old attacker mainly plays on the right wing for Utrecht, but can be used elsewhere in attack.

Last season was a productive one for the player as he scored 10 goals and provided eight assists in a reduced Eredivisie season. In the campaign before that he found the back of the net eight times and added nine assists in 33 league matches.

Those figures would usually attract interest from elsewhere quickly, but Kerk has been somewhat undiscovered. Leeds United have changed that, and De Telegraaf believe a move is close for Marcelo Bielsa’s side.

Cagliari and Hellas Verona have both been keen, with the former prepared to reach €7m for the player. That isn’t enough for Utrecht, who are looking for around €10m, and it would be assumed Leeds are willing to approach that figure. 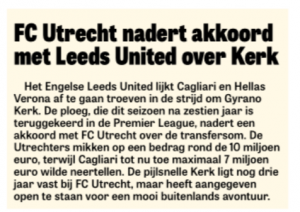 De Telegraaf state Kerk has been keen on leaving Dutch football, and therefore the move to Elland Road would be very welcome.