The more weeks go by, the more Leeds’ decision to sell Ronaldo Vieira to Sampdoria looks like a foolish one.

The Championship side felt forced to let their starlet go, face with an offer, and now the Serie A side are reaping the benefits.

We’ve already covered how the 20-year-old has managed to wriggle his way into their first-team of late, and now Corriere dello Sport reckon he could easily stay there, battling for a spot on a weekly basis with Albin Ekdal.

In fact, the newspaper see the former Leeds starlet as the latest in a long line of youngsters Sampdoria have helped develop, only to sell them to bigger clubs for a huge profit.

First came Milan Skriniar, bought for £5.4m and then sold for £30.6m a year later to Inter, who was then followed by Lucas Torreira, allowing the Serie A side to make close to £25m in just two years. 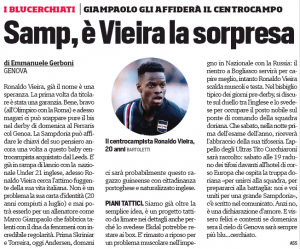 Next in line will likely be Joachim Andersen, followed by the likes of Tottenham and Manchester United, who signed just last year for £1.26m.

The year after that? If all goes to plan and Vieira continues to grow as he has done this season, then Sampdoria can start rubbing their hands in glee, having spent less than £6m on his services in the summer.

We just hope Leeds have some kind of clause entitling them to some of the profits made from any future sale.