Since coming off the bench in Leeds United’s defeat to Manchester United in December, Pascal Struijk has started 10 league games in a row.

The 21-year-old’s ‘rapid development’ has not gone unnoticed and in particular, has caught Leicester City’s attention.

That’s what De Telegraaf are reporting in today’s edition of the newspaper, and add the Whites man is attracting ‘interest’ from the Foxes and Napoli.

It’s claimed both Brendan Rodgers’ side and the Naples club have ‘inquired’, most likely with the centre-back’s camp, about signing Struijk.

That’s about the only information mentioned about Marcelo Bielsa’s man, who has a contract with Leeds until 2024.

Struijk was born in Belgium, but has represented the Netherlands at youth level. He has been in the news in recent weeks, after deciding to apply for a Belgian passport.

Roberto Martínez has confirmed De Rode Duivels are closely following Struijk and has already held talks with him. 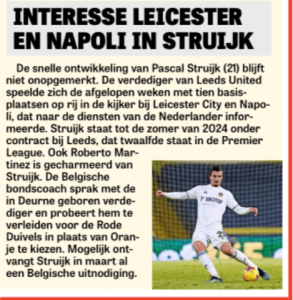 De Telegraaf even suggest the versatile player could receive a Belgium call up for March’s international break.

While Belgium and the Netherlands are yet to find out Struijk’s decision on international representation, a new battle, this time involving Leicester and Napoli, could take place in the summer.