While still not official, the transfer of Elia Caprile from Leeds United to Bari in Serie B is on the verge of being done.

We say this because Corriere dello Sport on Wednesday are reporting the 20-year-old already ‘underwent medical examinations at the Sports Medicine Centre in Bitonto’ ahead of the move.

Loaned by Leeds to Pro Patria in Serie C last season, the young goalkeeper did really well during his stint in Italy, which has now led the player to be bought by Bari.

The amount received by the Elland Road side in exchange for Caprile isn’t revealed, but what is is the fact ‘a three-year deal is ready’ for the youngster. 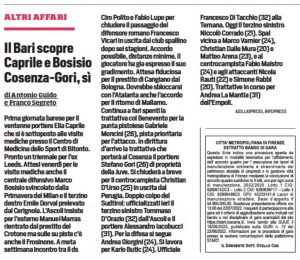 Signed by Leeds in 2020 from Chievo’s U19s, the shot stopper never made an appearance for the first-team, but did appear a few times on the bench under Marcelo Bielsa, both in the Championship and in the Premier League.

However, it appears Jesse Marsch doesn’t have any plans for him going forward, hence why Leeds are happy for him to return to Italy, where his dream will be to eventually play for Napoli.