The forward has three goals and an assist in 20 league appearances, and has made only two appearances since January as injury has forced him to spend more time away from the pitch.

According to Fichajes.net, the 30-year-old’s situation at Elland Road is ‘not the best’ as he’s ‘not comfortable living’ in England.

The Spain international is not playing regularly in his preferred position and is of the belief he’s ‘not a relevant’ figure under Marcelo Bielsa. His performances, or lack of them, is likely to cost him a place in the national team for Euro 2020.

It’s claimed the ex-Valencia man is ‘tired’ of his situation and wants to leave the Premier League side and return to La Liga in the next market to boost his chances of making it to the 2022 World Cup.

Fichajes.net state there are a few teams willing to open their doors for the Spaniard, and this includes Real Betis and Sevilla.

These two sides are ‘interested’ in the player and are ready to make him their ‘star’ signing in the next market.

The report doesn’t specify Leeds’ stance on letting Rodirgo leave, just a year after signing him. 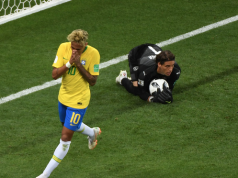 Idea of signing Tottenham defender has ‘regained strength’ at club –...