Originally bought as a forward, Ezgjan Alisoki has slowly but surely been converted into a more defensive player under Marcelo Bielsa at Leeds United.

The North Macedonia international has played at left-back more often than not this season, but has still managed to contribute to a fair chunk of the attack in the process, scoring four goals and assisting another three in 27 league appearances so far.

However, after a relatively poor performance against Nottingham Forest, the 28-year-old was dropped by Bielsa for the game the most recent match against Brentford, which finished in a 1-1 draw.

It was sign he needs to buck up his ideas if he wants to continue to feature regularly at Elland Road, as Leeds have started to allow West Brom to run away with the title, currently six points behind Slaven Bilić’s side.

Still, promotion to the Premier League is well within their reach, and Alioski, speaking to Corriere del Ticino in Switzerland, discussed the possibility of rejoining England’s top-tier. 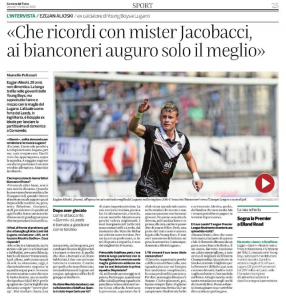 He said: “First of all, I say that I’m lucky to be part of this club, and to be trained by a manager like Marcelo Bielsa. It’s an honour, really. We play wonderful football, in my opinion, the best in the entire Championship.

“But to see this through and get the ticket for the Premier League is difficult: there are no favourites here. Also, everyone wants to beat us, by using their bodies. Anyways, I see a lot of enthusiasm in the eyes of our fans. I can only imagine what it would mean to achieve that dream”.