A couple of weeks ago, we relayed a story from La Repubblica in Italy looking at Leeds’ Andrea Radrizzani and his attempt to save Bari from bankruptcy.

When new debts were found, the Championship club’s owner pulled out of a deal, but stated he would ‘remain available to evaluate future collaborations and investments’.

According to the latest reports in Italy, the Leeds chairman is a man of his word, and Telenorba believe ‘several groups of small and large entrepreneurs’ are working to ‘establish and present the new sporting project of Bari’, among which is Radrizzani.

Alongside him is Ferdinando Napoli, the creator of Edilportale. 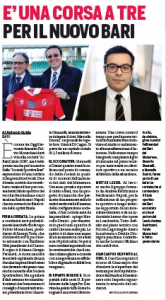 It’s a bit of a competition between various groups, but the Leeds owner’s plan, according to Corriere dello Sport, is to present a ‘long-term’ project, financed by ‘foreign investor’ but with a local industrial base.

Now we wait to find out if his is the winning proposal.

In Italy it’s expected that any successful deal could lead to a partnership relationship with Leeds, something which may benefit both clubs.