As well as owning Leeds United, Andrea Radrizzani has other business ventures, including Eleven Sports.

The channel may have never fully taken off in the United Kingdom, but the 46-year-old certainly hasn’t given up on it, recently seeing an opportunity that could help him, and the Italian football market, going forward.

There is currently an ongoing bidding war in Italy over the Serie A TV rights, as they are currently up for renewal, and two major parties are going at it to secure them.

The first is the well-known and trusted Sky, who have broadcasted the league for the past 20 years, but they are currently being outbid by online service DAZN in partnership with TIMvision (TIM for short).

Sky have put €750m/year on the table, while the other two are currently prepared to pay €910m/year (€840m + €70m offered by Sky for the right to broadcast three of the 10 games each weekend should DAZN win).

This is where the Leeds United owner comes in, as Il Sole 24 Ore reported on Thursday, and continue to do so on Friday, that Eleven Sports have come forward and proposed a figure of around €110m/year for the creation of an exclusive online channel in partnership with Sky. 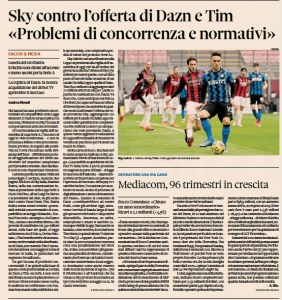 That would take Sky’s offer to broadcast all 380 games to around €860m, making it far more appealing, especially with it being claimed that the Lega Assembly, who will make the final decision, ‘aren’t convinced by DAZN and consider Sky the most reliable platform given their experience’, according to Calcioinpillole.

Furthermore, they are ‘skeptical of DAZN and TIM, especially because the Italian internet network is still far from completely being fibre’.

It’s a very tricky situation, and despite a meeting today, the belief is a decision will not be taken just yet.

We’ll now have to wait and see whether the Leeds owner’s bid actually helps Sky, but if they do win the rights, it could be a huge boost for Andrea Radrizzani and his Eleven Sports network.