With the uncertainty regarding Marcelo Bielsa’s continuity at the club, it seems Leeds United have already started moving in the search for a potential new manager.

Portuguese newspaper A Bola is the one featuring a piece today claiming the Whites made an informal approach with the entourage of Sporting coach Ruben Amorim.

With no offers or official contacts with the Lions yet, all Leeds wanted is to check on the manager’s situation and tell his agents about the possibility of a move in the future.

Meanwhile, Sporting are said to be calm about the situation, since Amorim is protected by a release clause of €20m. 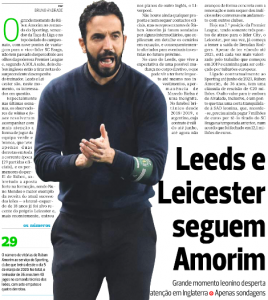 A Bola writes that Leeds are expecting changes at board level, which could have an impact in the club’s investments.

That’s one of the reasons why Marcelo Bielsa’s stay is seen as an ‘unknown’, as he hasn’t given any signs about a renewal yet.

That’s why it’s claimed that the Whites’ scouts have been ‘following with more attention’ the way Sporting play. The Lions are currently on top of the Portuguese League table, close on winning a title after many years.

Since Ruben Amorim is only 36 years old, his work at the club is obviously standing out, especially because they don’t count on big stars in their squad.

With the Portuguese coach focused on their campaign for now, Leeds are probably working early so they can be ready in case Bielsa decides to leave Elland Road.