Allowing Kiko Casilla to join Elche CF on a loan deal has made Leeds United look for a new goalkeeper.

Claims made in the British press have reached Spain and today’s edition of Levante-EMV details the situation with the 24-year-old.

It’s claimed the Whites have shown interest in the custodian, who made 13 appearances for the La Liga side last season.

The interest from Marcelo Bielsa’s side coincides with the Spanish club’s intention to offer an extension to the keeper. Levante have plans to tie Cárdenas to a new deal until 2025, which will also include a €50m release clause.

According to the report, the player’s idea was to continue with his current employer, but that was before the Premier League side arrived on the scene. 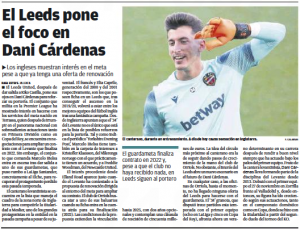 As things stand, ‘no offer’ from Leeds has arrived at Levante ‘so far’. The English club, however, follow Cárdenas and time should tell whether they will make an approach this summer.