Boasting to have beaten Manchester United to the signing of Jean-Kévin Augustin on loan from RB Leipzig, Leeds’ joy at Elland Road didn’t last long.

The French striker struggled to convince Marcelo Bielsa that he was good enough to be trusted up front, and then came the whole kerfuffle of the automatic purchase clause with the club’s promotion to the Premier League.

RB Leipzig believe they are owed a pre-agreed €21m, which Leeds dispute, since the season ended after the end of the player’s contract, thus making the clause null and void.

That’s all still ongoing, with the German side still pushing to get their money, but, in the meantime, Augustin is at Nantes, where things are going terribly.

Arriving at the Ligue 1 side on a free, the 24-year-old has only played three games for the club, all from the bench, and, until Saturday, hadn’t made an official football appearance since November 28th 2020, when he played 16 minutes in a 3-1 loss against Marseille.

That being said, his weekend cameo, which lasted just 15 minutes, came for Nantes’ B team in National 2 – Group D, as his side won 2-1 against Trélissac FC.

Ouest-France cover it on Monday, with praise from his current manager, Stéphane Ziani, but it’s clear the player, who still has a lot of his career ahead of him, is still struggling to get back into the swing of things. 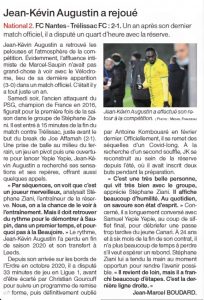 Pushed to one side by Christian Gourcuff after that Marseille game and then completely discarded by his replacement, Antoine Kombouaré, the official line is that Augustin is, according to Ouest-France, ‘recovering from long Covid’.

He’s six months from the end of his contract with the Ligue 1 side, and the former Leeds man is now facing the free transfer market, having not played for a first-team in over a year, and unlikely to do so before June.

As the local newspaper put it, ‘he doesn’t have a lot of time left if he is to hope for a rebound’, but Ziani is doing his best to help him turn things around.

Regarding the Leeds-Leipzig off pitch battle, the last we heard, the Whites had yet to pay the €21m they owed their German counterparts, and there was a ‘long battle’ ahead between the two.