After finishing his loan spell at Fulham, Sergio Rico returned to Sevilla and is likely to leave the club this summer.

Marca reported on Wednesday the La Liga side have identified Leeds United’s Kiko Casilla as a possible replacement for Rico and these claims have been picked up by ABC Sevilla today.

It’s claimed it’s logical to think the former Real Madrid man would be seduced by the idea of playing for Sevilla, who will be playing in European competition next season.

However, the Championship side have other plans.

ABC Sevilla say a Leeds United source have told them they’re working on the sale of second choice keeper Bailey Peacock-Farrell to Burnley and then want to bring in a ‘young goalkeeper’ as his replacement.

Given Victor Orta’s connections to Sevilla, there’s a chance ABC, a major newspaper, contacted him. He’s spoken to them on several occasions.

Marcelo Bielsa’s club do not intend to part ways with Casilla and at Elland Road they believe the 32-year-old prefers to continue at Leeds.

ABC Sevilla claims it remains to be seen ‘what direction events take’, if Sevilla convert their interest into a proposal for Casilla. 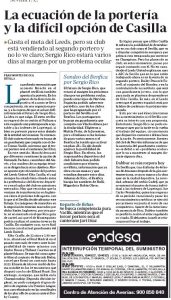