Finally returning to the Premier League after a 16 year wait, Leeds United are set to have a busy summer.

They haven’t made a big splash yet, but judging by some of the rumours circulating, notably those involving Valencia’s Rodrigo, that could change very quickly.

While Marcelo Bielsa has made it clear he wants to bolster his attack for next season, there’s also the defence to look at.

One of the recurring names, at least from the Italian press, is that of Torino’s Lyanco, whom Leeds are reportedly keen on.

Gazzetta dello Sport explain as much on Tuesday, naming Bielsa’s side alongside the likes PSV Eindhoven and Bologna for the 23-year-old. 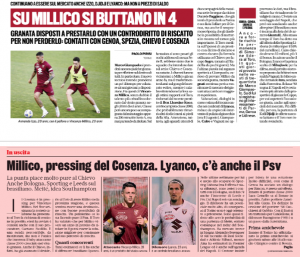 Sporting CP were also on the case, but their first offer was turned down, which is where Tuttosport come in with some details.

They don’t mention Leeds, but they do give us a clearer picture of where things stand.

The newspaper reveals Sporting’s offer of €6m + 50% of the next transfer wasn’t good enough, with Urbano Cairo wanting ‘at least €12m + €3m in bonuses’.

So that’s what Leeds need to put on the table if they want anything to do with the Brazilian next season.