It appears that, despite having a busy transfer window in the summer, Leeds United could end up being active on the January one as well.

Two names have been recurring over the past week, and they both come from the same club: Fiorentina.

The players involved are Erick Pulgar, who plays in midfield, and Christian Kouamé, an Ivorian striker once close to a move to Crystal Palace.

There have been a few articles written on Marcelo Bielsa’s interest in the pair, and they continue to be published in Italy to this day, with both La Nazione and Corriere Fiorentino bringing it up on Tuesday.

Starting with the former of the two, it’s said Leeds have ‘come forward’ for the midfielder, and there are even ‘confirmations on the double move relating to Pulgar and Kouamé’. 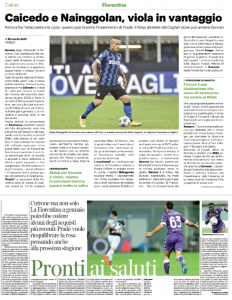 As for Corriere Fiorentino, they point out the Chilean was ‘followed closely’ by the Premier League side in the summer, and ‘the team coached by Bielsa could be on of Fiorentina’s winter interlocutors as the Argentine coach continues to appreciate both’.

Pulgar has seen his game time somewhat limited so far this season, starting just four games in Serie A, which is one fewer than Kouamé, who has five starts (13 appearances), during which he has just the one goal.

As you can see, they aren’t key first-team players under Cesare Prandelli these days, making this a more than doable operation, as long as the money is right.