Later that day, Bild dismissed the possibility of the midfielder leaving the Bavarian club, due to their thin squad.

Over the past few days, several clubs have come forward to try and sign the 21-year-old, according to L’Equipe.

The Whites are among them and Bielsa has used his connections in France to collect information about the player.

Bielsa believes Cuisance is the ‘missing piece’ in his side’s midfield, and the manager wants to include the former Borussia Mönchengladbach man in the heart of his project at Elland Road.

Therefore, he’s asked the club’s leaders to make an offer, and the newspaper adds ‘it’s on Bayern’s table’.

Bayern, who share a good relationship with Leeds, find the English club’s offer very consistent with the player’s value. L’Equipe adds ‘an agreement is close’.

It’s also claimed the Premier League club are ahead of other clubs and have an attracting plan for Cuisance. 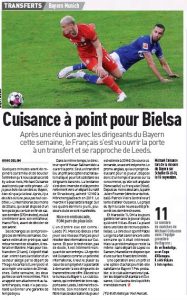 Having already lost Thiago Alcântara to Liverpool, L’Equipe suggests a loan deal with an option to buy may not satisfy Bayern. They ‘need cash immediately’ in order to strengthen their squad.

Sport1 have relayed L’Equipe’s report, and provide their own information on this case. They state the Frenchman has been pushing for a move for some time.