Leeds United are ‘one of the candidates to take’ Okay Yokuşlu in the summer.

The Celta Vigo midfielder spent the second half of the season on loan at West Bromwich Albion, and they had no option to make his stay permanent.

Even if they did, it would have been difficult for Baggies to retain him following their relegation to the Championship.

Having made 16 league appearances for West Brom, his displays have caught attention of the Whites. That’s according to Faro de Vigo, a newspaper local to the Spanish club.

The Turkey international has a ‘good image’ in England following his loan spell with West Brom, and it has ‘opened up a powerful market’ for him in the Premier League.

Only Marcelo Bielsa’s side get a mention, and Leeds received encouragement after the player expressed his desire to continue his journey in England.

“My experience in England has been very good, I was very happy, but I don’t know what the future holds. Perhaps the structure of the Premier League, the culture and the habits of the country may be more suitable for me, but I think the language of football is unique,” he said.

“The confidence of the club in me and the atmosphere of the team may also have been decisive for my good performance. I don’t know if there are any offers from the Premier League, but it was a very productive second half of the season for me. Of course, I would like to stay.” 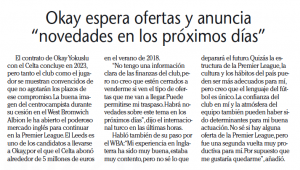 Yokuşlu made these comments over a week after his agent opened the door for his client to make a switch to the Premier League.

The player has two more years left on his contract, but Faro de Vigo explain the two parties are ‘convinced’ of parting ways. Whether he will move to Leeds United or another club remains to be seen.