After leaving Aston Villa this summer, it seems that defender John Terry could have a chance to continue his career in Portugal.

As reported by Portuguese newspaper A Bola today, the player has held a meeting with Madeira Rodrigues, one of the candidates to Sporting’s presidency.

Rodrigues would have made the former Villain defender a double offer. First, to join Sporting as a player, with a special bonus, which would be to have his old boss Claudio Ranieri as a manager.

The second one is to be the club’s ‘ambassador’ in the Premier League, and enhance Sporting’s brand in the United Kingdom. 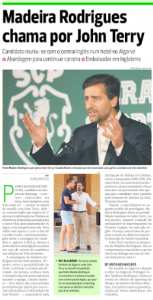 But of course, it all depends on the elections results on the 7th of September. That’s why Terry hasn’t committed for now, and ‘left the door open’ in case Rodrigues becomes the new Lions president.

Now at the age of 37, John Terry is currently a free agent. He’s left Chelsea FC on a free move to Aston Villa last summer, but did not continue at the Championship side once his one-year contract came to an end in June after their failed promotion bid.